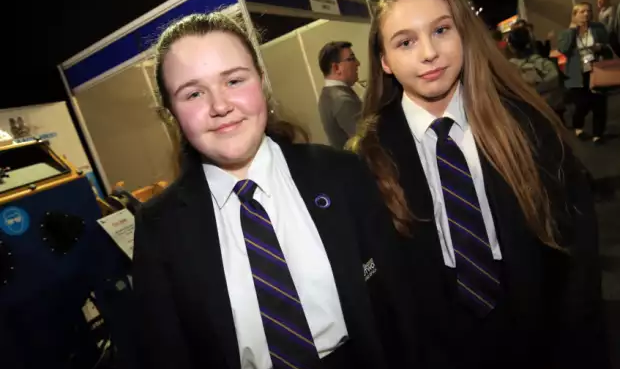 Faced with a huge recruitment shortfall, local engineering firms organised a one-day show to inspire children – but did it actually work?

The sector has long battled an image problem, youngsters dreaming of easy fame on talent shows, the demise of government-sponsored training under Margaret Thatcher and allegedly out-of-touch teachers focused on sending youngsters to university.

Eight years ago, work-wise, a work experience charity backed by business, organised Get Up To Speed,’ an exhibition featuring cars and computers and a host of hands-on displays from bikes to armoured vehicles and from jet engines to plastic moulding.

Some 500 pupils attended the first one.

This week the eighth and biggest was held at Magna in Rotherham and more than 2,500 from 48 schools turned up, while global giants such as Rolls Royce joined a record 80 exhibitors – justifying a claim to be one of the most important careers events in the North.

But despite record effort and support, what do the children think?

Even after taking into account they were having a fun day out of the classroom, it seems GUTS works – particularly with girls.

Akayzia Butt, aged 15, of Outwood Academy in Newbold, near Chesterfield, said: “It’s amazing and inspirational, I liked the virtual reality display. It’s inspired me to knuckle down and get good grades.”

Jessica Brown, 15, also at Outwood, said she had thought engineering was just about cars.

The school brought 70 children, and science teacher Sarah Phillips said she thought girls got more out of it than boys.

“Our girls in particular have been really positive. And it’s nice to see women on the stands as well.”

Lydia McGuinness, aged 20, is a trainee site manager at construction company Henry Boot and was showing youngsters how to bolt together structural steel.

She says she defied teachers pushing her to go to university and left Silverdale as soon as she could to start an apprenticeship in construction and the built environment.

Four years on, she is working on Barnsley’s £120m town centre redevelopment and taking a degree in construction and project management at Sheffield Hallam University.

She said: “I always wanted to go into engineering. The school careers adviser tried to talk me out of it.

“Now I’m getting so much experience while my friends are at university getting deeper into debt, they wish they had done this. Construction is so much more than bricklaying and women are just as suited to it as men. I’ve given talks in schools and I think attitudes are changing.”

And they seem to be changing fast.

Matthew Gunnee, aged 16, attended GUTS twice when he was at Firth Park Academy. Just a year since his last visit, he was manning an exhibit for Liberty Speciality Steels, where he is now an electrical engineering apprentice. He also plans to get a degree, all while earning a wage.

He said: “I found it hard to find out about companies and what they do. But coming here and talking to people actually doing the job opened my eyes to so much.

“Now I’m talking to young people with a better understanding of engineering than I ever had and that’s in just one year.”

Bosses often take aim at teachers for failing to produce work-ready kids, while pushing others to go to university.

But the popularity of Get Up To Speed shows things are changing.

Nick Woffenden, teacher at Dronfield Henry Fanshawe School, said it was his third visit and he defended the school’s role in developing social skills.

He added: “Learning how to address strangers is quite limited in a school environment.”

But their main job was to prepare kids for exams.

“We are doing as much as we can with the time we’ve got with the students.”